Gather ye photos while ye may


A recent experience brought me mindful of one of the most important rules of photography: if you see something worth shooting, shoot it. If you have any way to take the picture, take it. Never think “oh, that thing will still be there tomorrow. I can photograph it then when I have a better camera and I have the time and so many other excuses to not do it now.”

I noticed this gutted, flat-tired trailer abandoned beside the road along the route I take to and from work every day. I admit I didn’t photograph it the first time I saw it. Or the second. Or even the third. But it was obviously worth a picture, and the fear that it would be torched or towed away started to nag at me.

Two days after I got my shot, the trailer vanished.

The second photo in this post is a picture of the torn-down remains of a house with nothing left standing except a fireplace and a built-in bookshelf. And the third photo is a picture of a semi trailer tipped over by the side of the road, its cargo of large, white spheres spread all over the ground.

The reason you aren’t able to see either of those photos is that I never shot them. I saw opportunities for photos, but I had other priorities. And when I came back, they were gone.

In my partial defense, both of these opportunities presented themselves back in the days before phones with cameras (and in the case of the chimney, even before digital cameras). But now we should all find it much harder to not take pictures when we can. 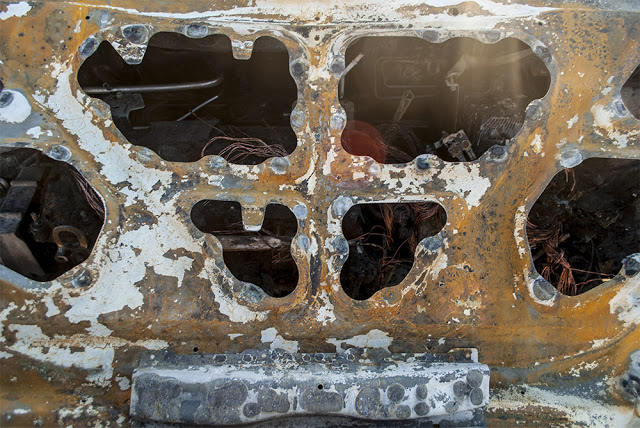 This too was a transient roadside find: a car that had been incinerated and abandoned along the same stretch of road as the trailer. And again it was gone the day after I took pictures of it. 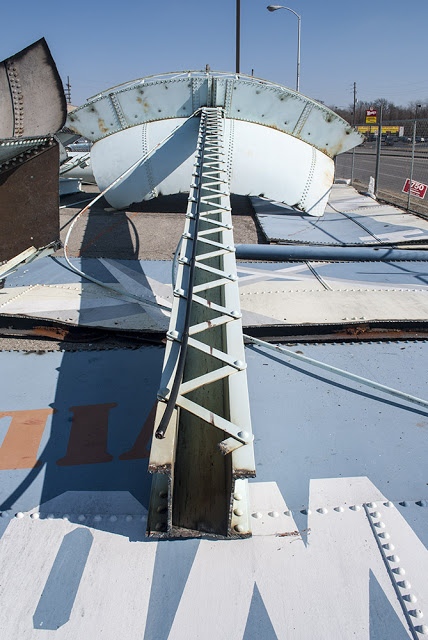 Long-time residents of eastern Wyandotte County may remember the Tower Plaza strip mall, named after the water tower that stood above the stores. In 2016 it met its demise. I took pictures of it before the dismantling began, but the mid-process photos were more interesting. Added bonus: the tower had a Hollywood Video logo painted on its side.


Posted by Bryan Whitehead at 11:42 AM No comments:


The new year began as usual with our annual trip to Kaufman Stadium to wish the Royals luck in the coming summer. The scattered glitter behind the medallion created an interesting halo effect.


This month we’re fostering two kittens. As a group they’re called The Wonder Twins. This one is Rudy.

And this one is Max.

Driving down Washington Boulevard not far from my house, I noticed a branch stuck on a power line. It made an interesting series of images.


Back at the college for pre-semester inservice. The actual weather was almost as gloomy as this black and white filter job implies.


A long time ago we had a Christmas tree on the back deck. Its tree topper was a sun face, at least until the ornament fell off and broke. Its pieces are still lurking about the deck. Frame ...


I needed a symmetrical landscape for a 52-week challenge I’m working on. I also needed some shot composition examples for the weekly exercise in my photography class. As the flags indicate, it was extremely windy. And very cold. I actually had to give up before I got everything I was after.
Posted by Bryan Whitehead at 11:12 AM No comments:

Kittens (lighting from the side)


This summer we fostered a set of six kittens, taking care of them until they could get spots at the Lawrence Humane Society. The day before they left us for the next step on their journey, we let them run around loose in the bedroom for awhile. I set up a pair of small continuous lights rather than use a strobe (thinking the flashing might spook them). Because the lights were near the same height as the kittens, the result was classic side lighting.

Side-lighting can produce different effects based on the positioning of the light and the subject. The photo above is a classic side light (with the source itself in the frame). On the other hand, in the photo below the subject is lit from the front by both lights. It isn’t quite the same as an overhead source, but it isn’t as dramatic as the first photo.


Nor is it as dramatic as a side light from behind. This little guy was constantly on the go, and the combination of back light, body posture and motion blur captured his personality well.

Posted by Bryan Whitehead at 8:16 PM No comments:

Email ThisBlogThis!Share to TwitterShare to FacebookShare to Pinterest
Labels: Light

This “best of” is going to be shorter than usual. Early in June I decided to suspend the 365 project for a little while. I had some other things going on in my life and just generally needed a break.


In this photo you can see one of the “I need some time off” factors. Two of the outdoor cats had kittens, and we decided to rescue them rather than have a handful of cats become a growing colony. This the first time that I saw them out of their hiding place long enough for me to go grab a camera.


My friend Ken likes to go to the Combat Air Museum in Topeka as a palette cleanser at the end of every school year. I tagged along this time so I could use the 810 to redo some of the pictures I’d taken there in the past with equipment with lower dynamic ranges.


Seizing the kittens proved to be more complicated than we first expected. They managed to get in under the deck steps where we couldn’t reach them. Knowing that their moms would move them if we didn’t get them all at once, I used a crowbar to pry up some of the boards so we could get at them. Everyone was successfully rescued.


For one of the last photos I took before taking a break, I went to the Kansas City Kansas Public Library’s food truck day. Which turned out to be one food truck. Still, it provided some good photo ops.
Posted by Bryan Whitehead at 11:18 AM No comments:


This year I thought I’d try something new for Fourth of July photos. A Petapixel article described a technique that produced puffy, flower-like images. My results differed, but I’m nonetheless pleased with what I got.

The trick was to set the shutter for long exposure (I went with a second or two), start with the lens completely out of focus and then snap to clear focus while the shutter was still open. The result is an image that’s partially in focus and partially out. It ended up creating an illusion of depth of field, which altered the perceived size of the subject (kinda like the tilt shift technique).

Our eyes work in ways quite similar to our camera lenses. So we're used to a more or less infinite depth of field for subjects at a distance but a narrower field for things that are close to our faces. That's why the part-in-part-out focus of the fireworks photo creates the illusion that it's a smaller object closer up.


I also brought the wrong tripod (going with the heavy one for stability but forgetting that it can be kind of a pain to point up at any angle greater than 60 degrees or so). So several of my sky burst photos were hand held, producing another interesting effect even when I wasn’t changing the focus mid-shot.

Posted by Bryan Whitehead at 10:00 PM No comments:

The end of this month marks the second year in a row that I’ve successfully completed the 365 project.


The sight of a tree covered with white blossoms in the middle of a graveyard was too interesting to pass up, so I actually retrieved a camera from home to get the picture. Unfortunately, at the time I was also playing around with some filters in Lightroom. I noticed after the fact that switching this to black and white makes the white blossoms indistinguishable from everyday green leaves.


Narrow depth of field makes for a good photo from the college’s flower garden.


During this year’s annual visit from the carpenter bees, I finally got camera, lens, light and subject to line up perfectly.


The clouds blew through without dropping any rain, but they certainly look ominous.


Part of the series of photos I took in the caboose we rented in Arkansas.


Another caboose shot, this time a rain-slick exterior.


I stopped for awhile in a small park in Eureka Springs and took pictures of some yarn-bombed trees. It was a relaxing experience.


Back at home, some used limes in the sink turned out to be more visually interesting than the average daily desperation photo.
Posted by Bryan Whitehead at 4:28 PM No comments:


Here’s the challenge: I’m after a shot of the art on the side of a food truck. I want the whole side of the truck in the shot to give the art some context (“food truck” rather than “painting”). But when I step back far enough to get the whole truck in the frame, I end up with a sign blocking the shot.


So I got another photo of the painting from closer in, with no sign blocking the view.


Photoshop to the rescue! Back at home, I combined the two pictures. In the wide shot, the sign blocked only a small chunk of the art, so I needed only a little bit of the other photo. A mask, a free transform, a small perspective warp and a brightness adjustment made the replacement piece match quite well with the rest of the image. Then a crop cut out some unnecessary background elements.
Posted by Bryan Whitehead at 8:21 PM No comments: